This has appeared in the June 2014 issue of Indian Management. 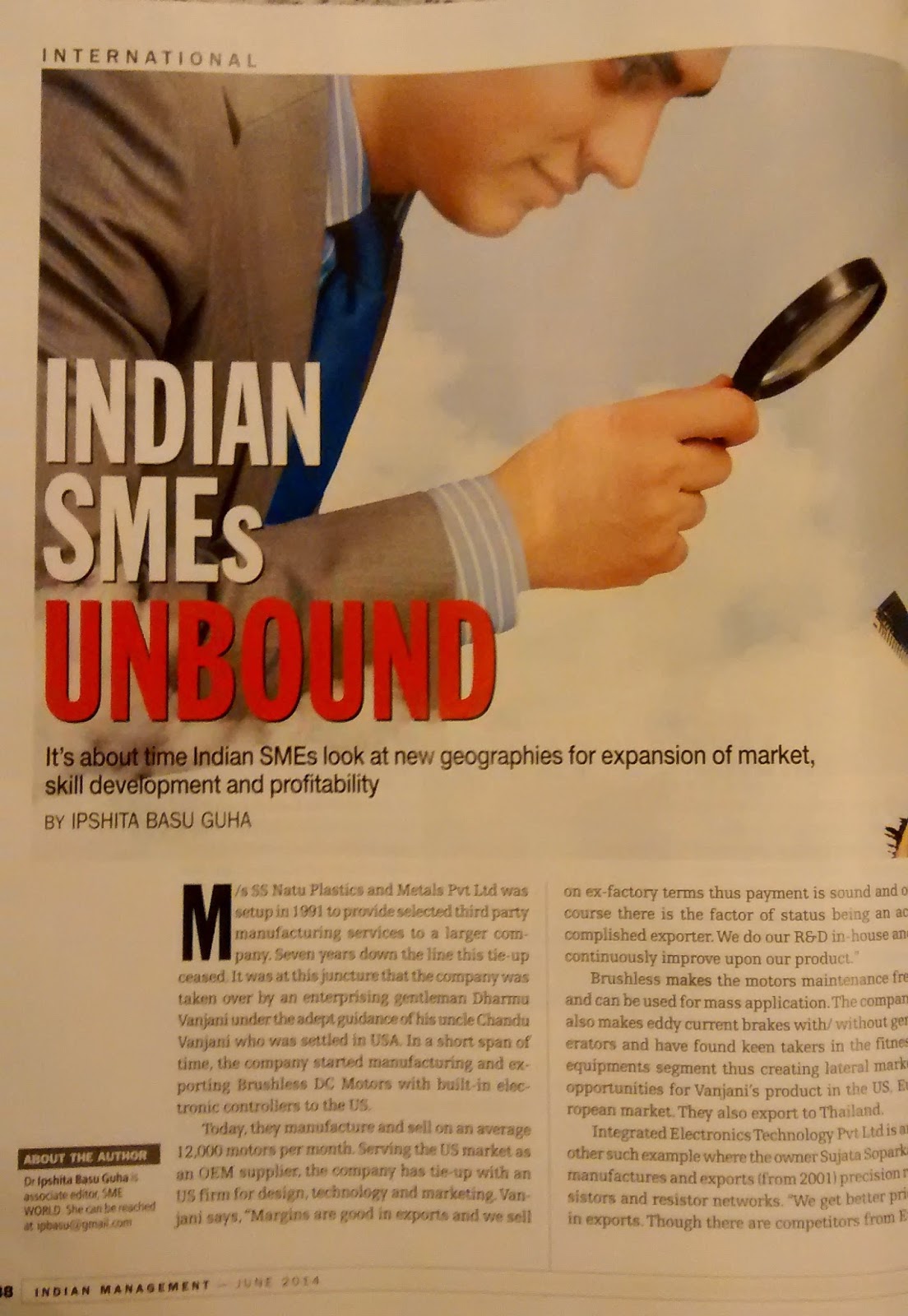 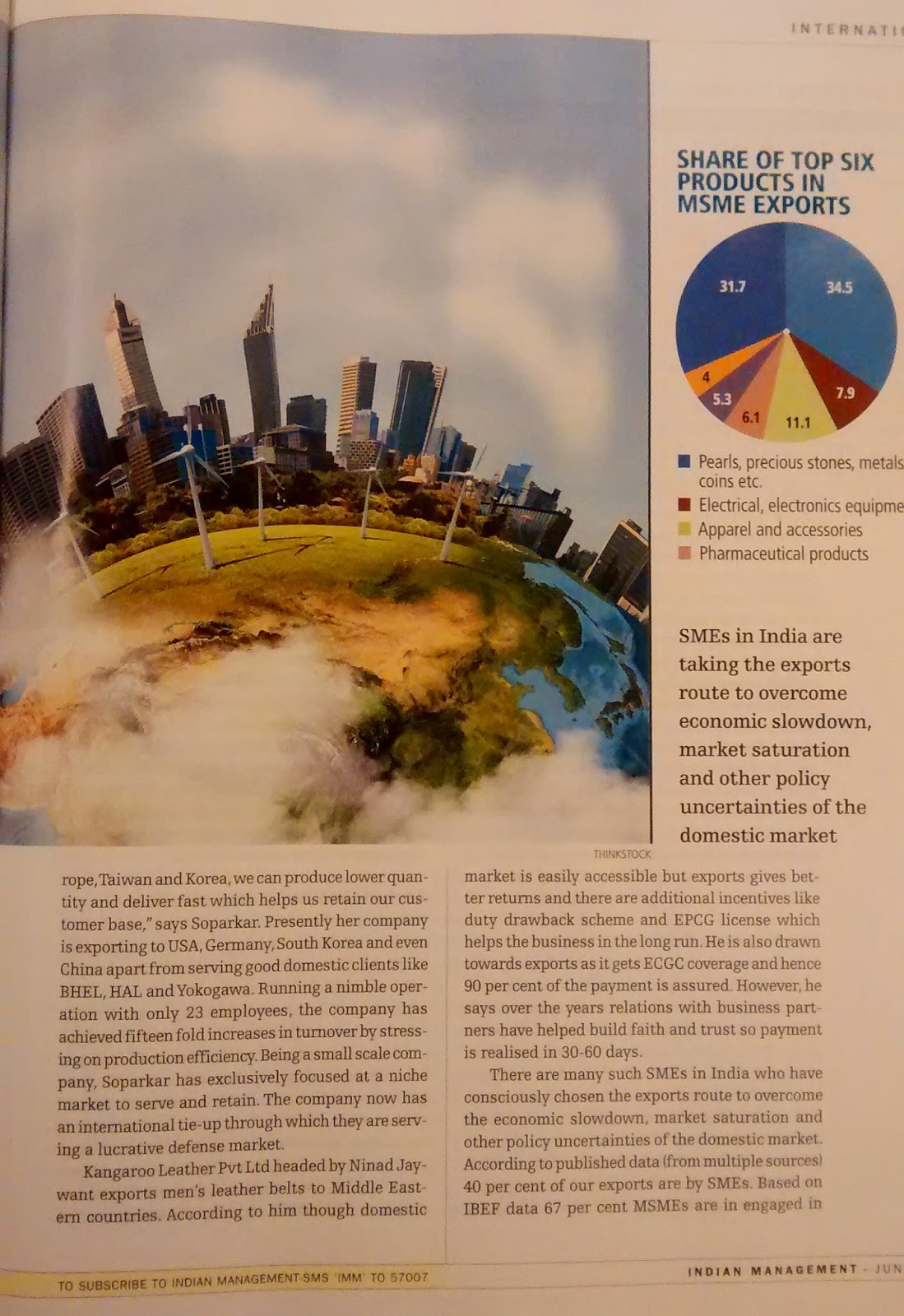 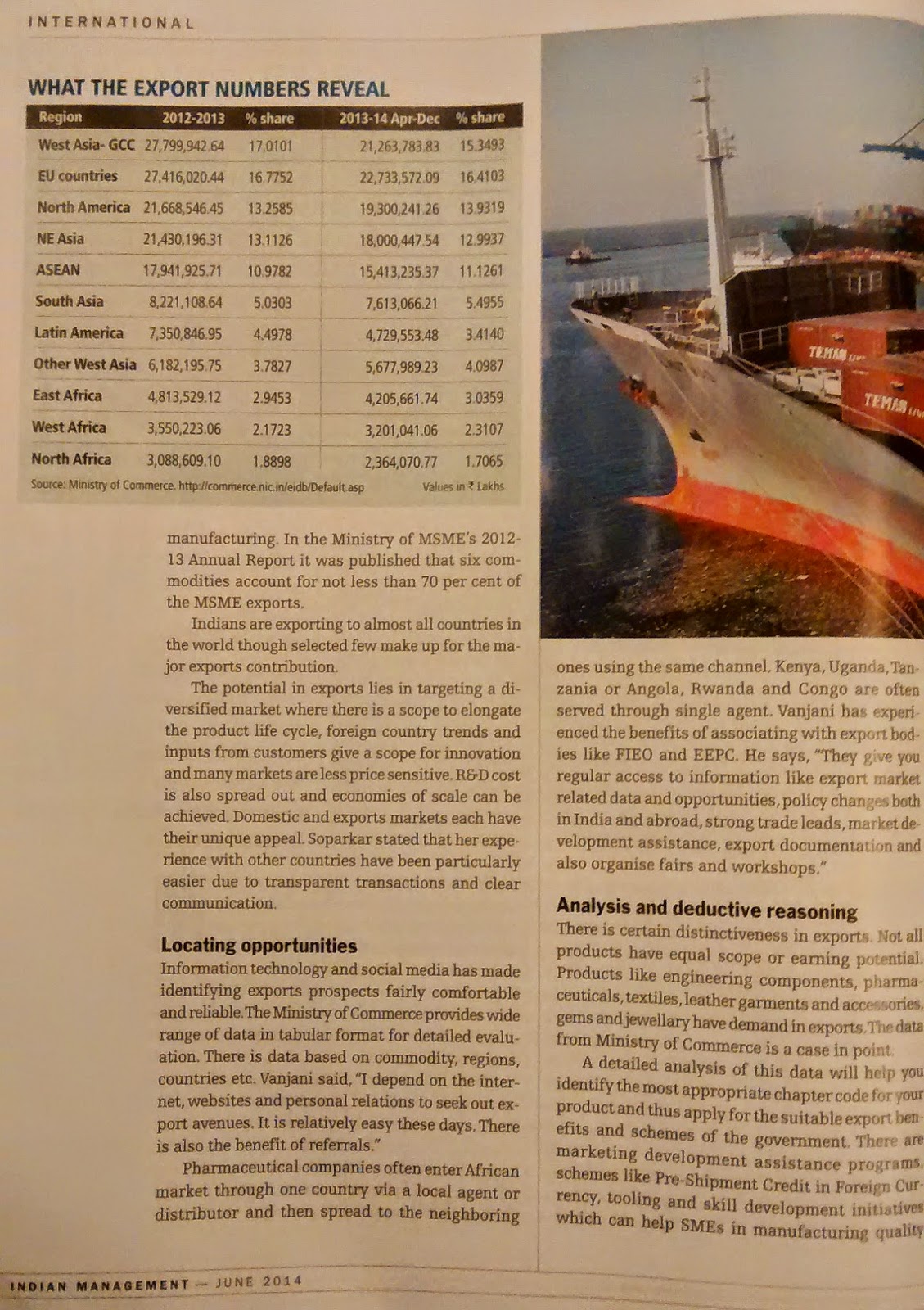 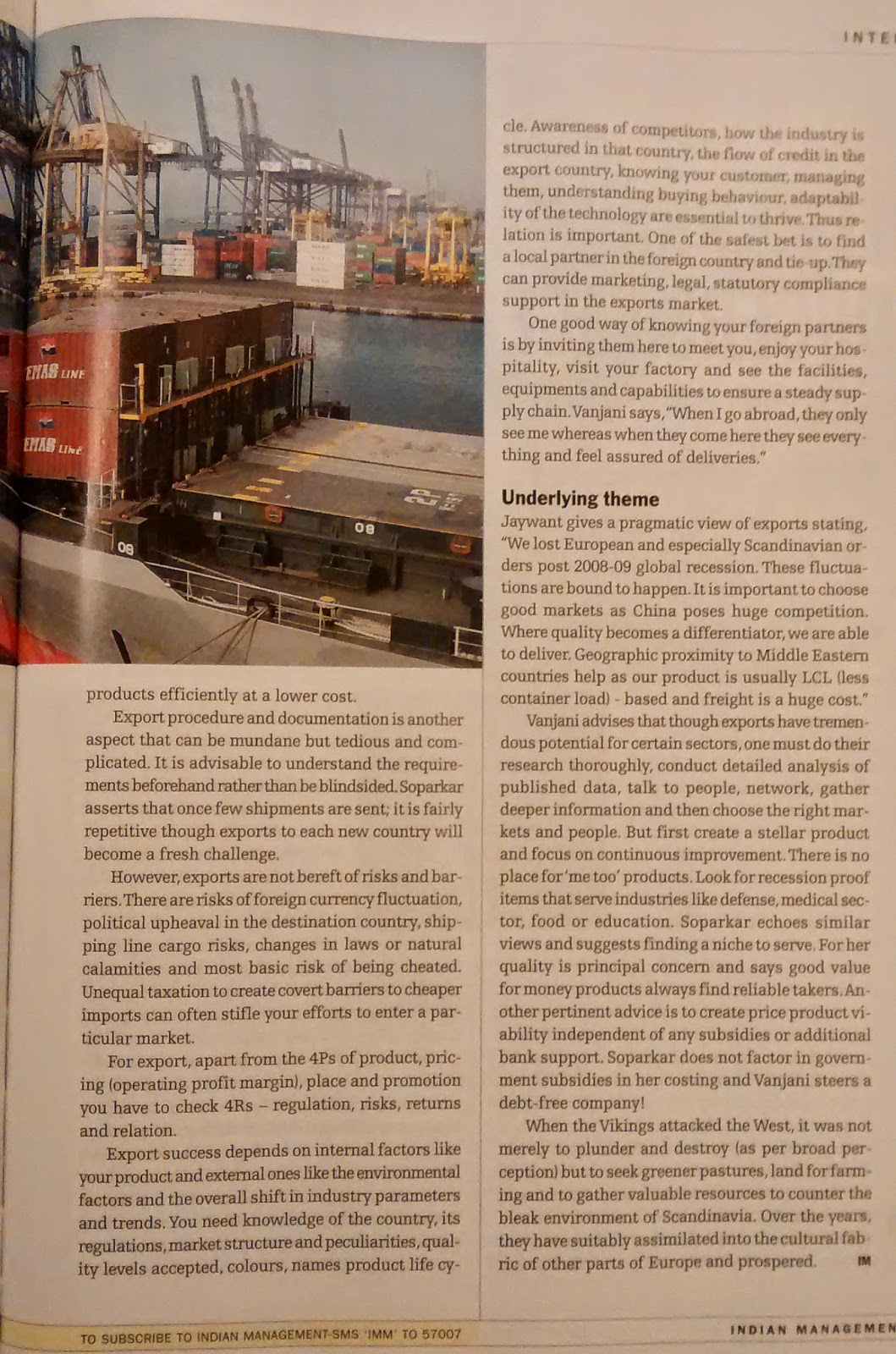 Posted by Ipshita Basu Guha at 10:24 PM No comments:


One of the richest men in the world, Warren Buffet continues to live in the same house in Omaha since 1958 and drives a 2006 model car. He was enterprising from his childhood and visited the New York Stock Exchange as his 10th birthday gift. He has pledged a huge part of his earnings to charity and leads a frugal life. His net-worth is $ 66 billion on 30th May 2014.
Elon Musk who is known for Tesla Motors, SpaceX and Solarcity dreams of colonizing Mars. Elon is a billionaire who went through deep financial crisis and risked everything he had to follow his dream. Driven and vested with sharp analytical skills he is one of the leading disruptive innovators in the world today.
For Steve Jobs, his work was his life. He continued to dazzle the world of technology with his innovative products till the end. Ousted from Apple, he reinvented the company. Once faced with the finality of death he knew he had nothing to lose and all the motivation to go ahead and make the change he wanted. In an interview Jobs was quoted as saying he never worked for money though it definitely renders the freedom to do many things. (He was worth over a hundred million dollars by the age of 25) Jobs wanted to create a company and build a team that could make products to empower people and change lives.
Co-Founder and CEO of Google, Larry Page, started using computers at a very young age. Google was incorporated in 1998 with a million dollar investment using borrowed equity. Larry was 25 years old. Rest is history.
Larry Ellison, the CEO of Oracle once said constant learning motivates me, the ability to see how far and how much we can stretch ourselves, achieve and improve. His product is paramount for him.
Adele who is an English songwriter and recording artist appeared on the Saturday Night Live show in October 2008. Within 24 hours her album called 19 became No. 1. Unlike the trend of pop stars who are more conscious about their physical appearance and placed prominently on magazine covers, Adele says she is a musician and focuses on only making music.
Man Booker Prize winner in 2009 and 2012, Hillary Mantel is an author who says she has got ideas flooding her mind and she has just too much to write about which keeps her going.
And one of the glowing examples of self – motivated successful persona is J. K. Rowling famous for her Harry Potter books. It was her inner conviction that writing a book would change her live. She wrote her first book sitting in cafes while supporting her infant child as a single mother subsisting on state support. The book was rejected twelve times by various publishers. Today Rowling is counted amongst the wealthiest women in the world.
Let yourself be silently drawn by the strange pull of what you really love. It will not lead you astray. ~ Rumi
We all are engaged in various kinds of activities in our day to day lives. How much of the work is done because we derive something out of it and what part is due to basic responsibility, duty and obligation?
The question that we should be asking ourselves is what truly drives us?
Is it money, fame, need for security, control, independence, the thrill of persistence, the joy of innovating and creating something new or simply enjoying the chance to change lives?
We often spend a lifetime doing things which we took upon ourselves for the want of something better or to protect the interest of our family or most likely because we never gave it a thought of what makes our inner spark glow and incites the flame of our soul.
Doing what we love determines our direction in life, our propensity to take risks, the inclination to learn and experiment or to follow a straight line, it guides us to create a strong succession path, how we nurture and train others, control and communicate, network and in businesses it points the direction which the business is most poised to take. The people who are successful around us are those who are doing what they truly enjoy doing and not look upon as work or task. They do not need motivation or to be urged to perform. Also such people keep on reinventing how they work to add value, remove waste and create a sense of warmth, belongingness and purpose around them.
Take the first step; ask the question, introspect and answer it.
Twenty years from now you will be more disappointed by the things that you didn’t do than by the ones you did do. So throw off the bowlines. Sail away from the safe harbor. Catch the trade winds in your sails. Explore. Dream. Discover. Mark Twain
Posted by Ipshita Basu Guha at 9:12 AM No comments:

From Desolation to the path of Deliverance

At a time when everything in this country seemed to be in an utter state of desolation and dereliction, the moral fiber of a huge part of this vastly populated country have woken up to their ability, sense of duty and responsibility to bring about the much needed change. This general election proved how the masses are ready to build a new India under the leadership and guidance of a man who has a proven track record. It is a welcome change to see one man and one party being given a clear mandate to rebuild this nation.
Here is someone at the helm of affairs who has the ability to rise above himself and determine pointedly what needs to be done, draw up a road map to achieve it and then deliver the results courageously even in the face of blatant criticism and vilification. Unlike many in the past who have only spoken about few vague words like poverty, food, jobs and empowerment, this man has actually delivered quantifiable results continuously that is open to public scrutiny for veracity. How many such people have we come across earlier who have actually walked the talk?
His humble beginning and his dogged focus for development differentiates from many who came before him or are his contemporaries. This is the man whom we believe will deliver our nation and create our destiny in the years to come. And in his scheme of things to bring about “achche din” small business and enterprises will be in the forefront of his action plan to invigorate this sagging economy.
With a penchant for transparency, streamlining and running a state like an institution, and his Gujarati background; we are confident that there will be a lot of simplification in conducting business; obstacles will be removed to encourage more enterprises to participate in nation building. Here is someone who does not believe in subsidies and doling out freebies, he will create the means and encourage the masses to participate and bring about the change that he has manifested.
We also believe that there will be a systemic transformation. The erstwhile lack of clarity and total ambiguity between policies and actions will be replaced by effective and measurable structured steps. The delivery process will surely bring into the forefront significant part of the half a billion enterprises that are unaccounted for. The small business players will also find a platform to voice their opinion, talk about the changes they seek and even work as partners to witness the same being delivered.
There are no quick fixes but with a man of integrity in place there is hope and promise for a good future. All we need to do now is have faith in our choice and allow for a reasonable time to enjoy the turnaround.

Posted by Ipshita Basu Guha at 2:03 AM No comments: